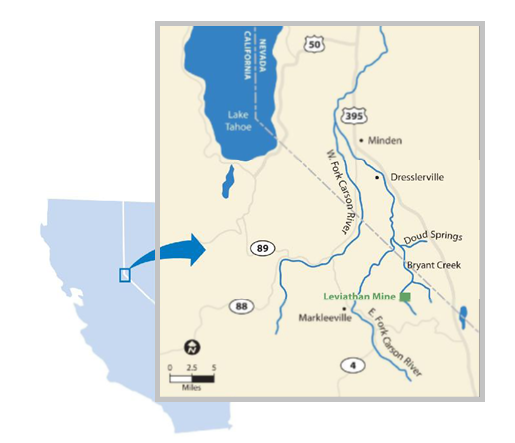 Leviathan Mine is an abandoned open-pit sulfur mine high on the eastern slope of the Sierra Nevada, in Alpine County, CA. The mine, 24 miles southeast of Lake Tahoe, has been contaminating a nine-mile stretch of mountain creeks. The Toiyabe National Forest surrounds the site, and there are no permanent residents within several miles. The stream system drains into Nevada about five miles from the mine and enters the picturesque Carson Valley nine miles downstream from the mine. Although there had been some mining activities for copper minerals since the 1860s, major environmental problems originated during the open-pit sulfur mining that occurred from 1951 through 1962. During this period, Anaconda used Leviathan Mine as a source of sulfur to dissolve copper from relatively low-grade ore at a mine near Yerington, NV. In 1962 Anaconda ceased operations and sold the property to a local interest. No significant mining activities have taken place since.

The high sulfur content in the waste rocks and fractures at the 250-acre mine site turns snowmelt, rain and groundwater into sulfuric acid, which leaches contaminants from the native minerals such as arsenic, copper, nickel, zinc, chromium along with aluminum and iron. This acid mine drainage then flows into the creek system at a number of points, devastating aquatic life until the creeks join the East Fork of the Carson River, a much larger flow. Since 1983, the State of California has invested millions of dollars to contour the pit and surrounding waste piles, channel Leviathan Creek around the major disturbed area and capture the most concentrated flow in a series of ponds. Except for high flow periods during the spring snowmelt, the acid rock drainage that has been identified produced roughly half of all the flow in Leviathan Creek. Until recent treatment activities, a thick layer of orange precipitate coated the streambed most of the year until it washed into the East Fork with the high spring runoff each year.

The investigation into impacts from the acid rock drainage will include contaminated sediment and soil along the stream system. The possibility exists that contaminants may be present in greater concentrations in these soils due to discharges from the mine and could pose an increased risk to plants and animals, and even to humans who might use these resources. 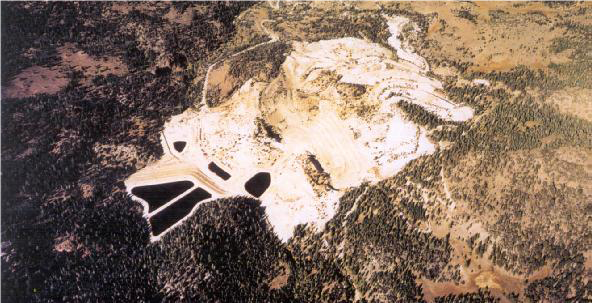