Pursuant to NMCP regulations, facilities must report mercury emissions and the mercury co-product collected annually. Annual reports are received by the NDEP in the month of March, each year. The NDEP reviews the data submittals and aggregates the data into a spreadsheet report by July 1st, each year. Mercury emissions are calculated for every thermal unit, which is not De Minimis, using the most recent NDEP-approved stack test emission factor with actual throughput (production) values for the year. The Annual Emissions Reporting (pdf) document describes the emissions reporting protocol and the NMCP Method 29 Source Test Guidelines (pdf) contains the Method 29 source test parameters. Learn more about Method 29 (pdf).

Under the US EPA Toxic Release Inventory Program (TRI), the threshold for facilities to report mercury (mercury compounds) is 10 lbs per calendar year. TRI defines a mercury compound as “any unique chemical substance that contains mercury as part of the chemical’s infrastructure.” TRI reporting calculates emissions from releases to air (fugitive and point sources), water discharges, land, transfers off site and other waste management activities. 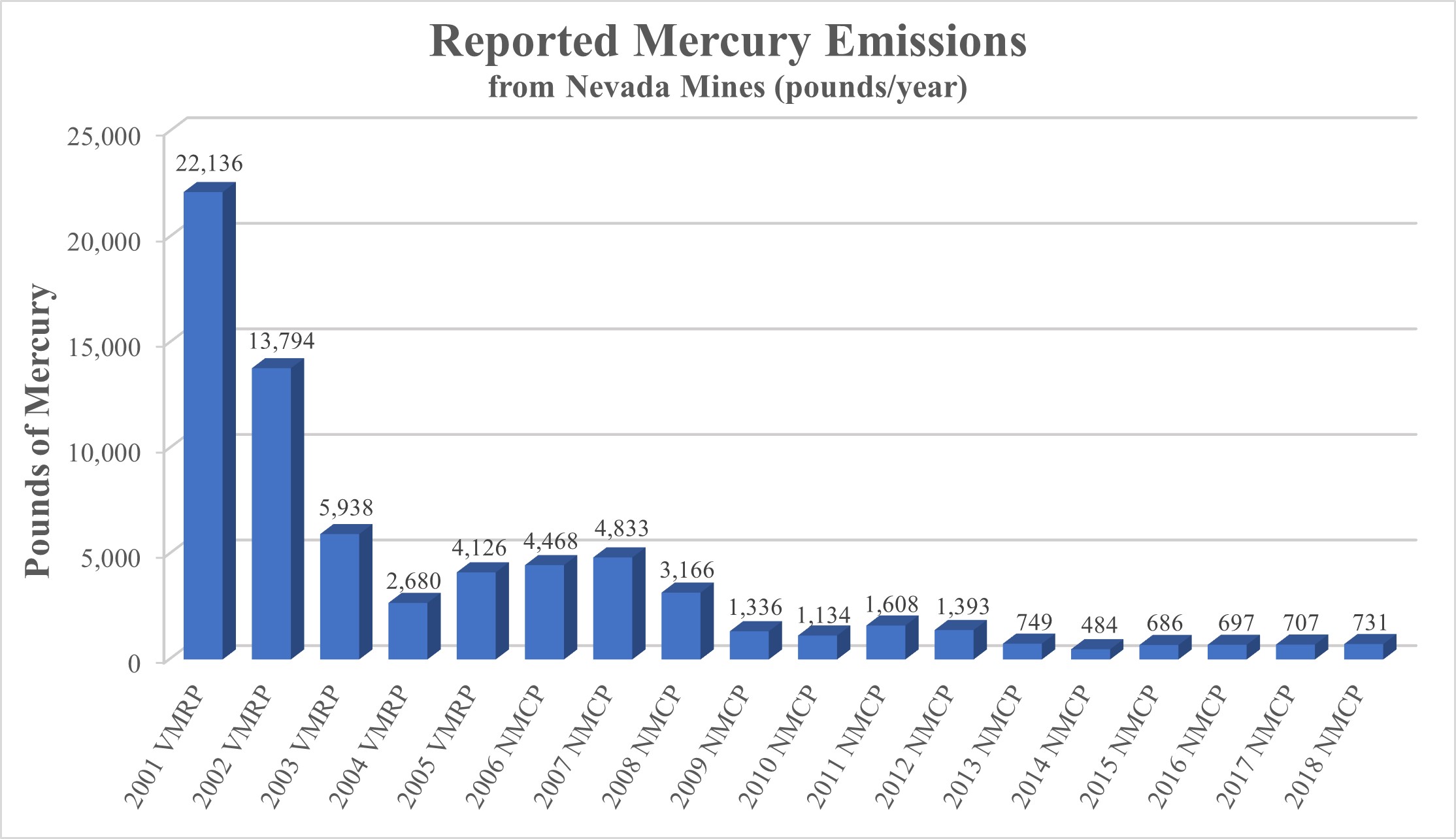 Below is a table of total reported mercury emissions by facility and calender year (CY). For more detailed reports in PDF format, click on the calender year heading (that is, CY 2006).

(1) 2006 Reporting Year
For the 2006 reporting year, not all thermal units had been stack tested for mercury emissions. Only Tier-1 units had the requirement to test prior to December 31, 2006; Tier-2 units began testing in the 2007 calendar year. Facilities which had not tested were instructed to use an emission factor from a similar unit in industry as a "surrogate emission factor." Later testing demonstrated that many of the surrogate values were quite different from tested values; thus the 2006 reported emission totals are coarse.

(2) 2008 Reporting Year
Note that 2 facilities had tests invalidated (Barrick Goldstrike and Ruby Hill), and 1 was not able to complete testing for all of its units due to an unexpected shutdown (Queenstake, Jerritt Canyon). The invalidated and untested units are displayed with red, blank cells in the reporting spreadsheet. Only valid 2008 test values may be used for the purpose of 2008 reporting. For the purpose of estimation, these red cell values may be populated for the purpose of emissions estimation (only) by using a valid test from an alternate year.

(3) 2009 Reporting Year
Note that two facilities did not have test data for all their thermal units in the 2009 reporting year. The untested units are displayed with red, blank cells in the reporting spreadsheet with corresponding explanations. Only valid 2009 test values may be used for the purpose of 2009 reporting.

(4) Facility Did Not Operate (DNO) any thermal units in years indicated.