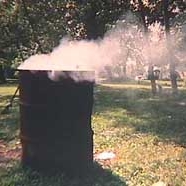 The pollution caused by open garbage burning endangers public health and ecosystems . It damages not only the air quality, but also the soil and water – in your own backyard.

Dioxin is a catch-all term for three chemical groups: true dioxins, furans, and polychlorinated biphenyls (PCBs). The most dangerous form of dioxin, 2,3,7,8-tetrachlorodibenzo-p-dioxin (or its abbreviation, 2378-TCDD), has been called "the most lethal human-made poison." Its toxicity is second only to radioactive waste; just three ounces would be enough to kill one million people. Even at levels less than one part per billion, it can cause serious health impairments.

Given off in large quantities by burning plastics and paper, dioxin accumulates in the soil in areas surrounding burn barrels. Ground-level concentrations of dioxin resulting from burning household garbage in a burn barrel are 7,000 times the amount formed when garbage is burned in a municipal incinerator.

Slow to break down, dioxin lingers for centuries in the affected area and is absorbed into plants that grow in the contaminated soil. Animals that eat these plants absorb the dioxin, and ultimately dioxin makes its way to humans who eat the animals or crops grown in this soil. Dioxin does not break down or pass out of our bodies; it accumulates in our fat cells.

Dioxin has been linked to a long list of adverse health effects, including:

For mothers living in exposed areas, the outlook for their babies is of particular concern: