Tetrachloroethylene [PCE] was released from the former Al Phillips Cleaners in the Maryland Square Shopping Center at 3661 S. Maryland Parkway.

The floor of the excavation was treated with an oxidant prior to backfill. The oxidant (potassium permanganate, KMnO4) was applied to further degrade the PCE in groundwater and soil beneath the water table. The excavation was backfilled with clean soil that had been excavated onsite to attain a safe grade on the sidewalls of the pit, as well as clean soil imported from offsite. Backfilling and grading of the site were completed in late October, 2011. 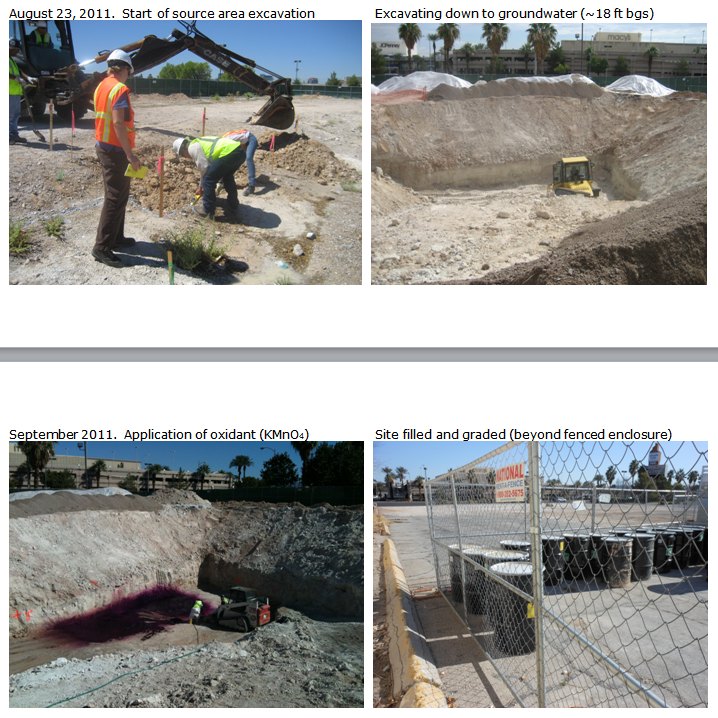 A Multi-Component Remedy for Cleanup of Groundwater

Logistical and technical issues led to preference of a remedy that combines hydraulic containment in one area of the site and treatment in another area. To reduce the amount of PCE-contaminated groundwater entering beneath the residential neighborhood east of the Boulevard Mall, groundwater extraction and above-ground treatment (known as “pump and treat”) is proposed for use on the east side of the mall. Extraction of groundwater upgradient of the neighborhood would provide hydraulic containment of the PCE plume.

The other component of the proposed remedy would be located just downgradient of the former dry cleaner, near S. Maryland Pkwy, in the western parking lot of the mall. This area is proposed to host remedies that physically remove or destroy PCE. Such remedies include air sparging (AS), which is typically combined with vapor extraction (VE) to capture fugitive vapors, and chemical oxidation. These remedies have less control over contaminant migration than groundwater extraction and therefore were judged as “not ideal” to implement adjacent to the residential neighborhood.

Details of remedy design and function will be presented in the Remedial Design documents. Preparation of these documents follows selection of the remedy and documentation of the selected remedy in the ROD.

Cleanup of Groundwater: Timeline for Remedy Design and Implementation