The Town of Pahrump is located in the Pahrump Valley of southern Nevada (hydrographic area 162) approximately 60 miles west of Las Vegas and 60 miles east of Death Valley. Pahrump is an unincorporated town governed by the Nye County Board of Commissioners. Located in Nye County, it borders the California state line. The town promotes itself as a tourist destination, and retirees comprise the majority of the population. 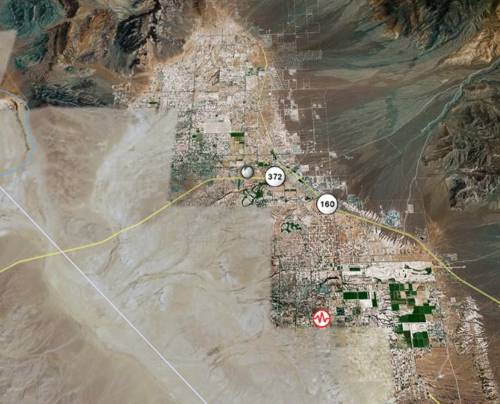 Fast population growth in the ‘90s through mid-2006 created intensive development. Large parcels of land were cleared of vegetation, subdivided and prepared for housing construction. Dirt and gravel roads were constructed. Many of the planned housing developments never materialized and the lots were left as disturbed, vacant areas.

As a result of the disturbed, vacant land and the number of newly cut dirt and gravel roads, fugitive dust (particulate matter less than 10 microns (µm), or PM10) became a problem. The Pahrump valley is subject to high winds that often create dust storms. Even the slightest wind can pick up dust from the disturbed areas, where it can become a health hazard.

Citizen complaints in the late 90's led to the installation of an ambient air monitor in the downtown area of Pahrump. The Nevada Bureau of Air Quality Planning (BAQP) began monitoring for PM10 in the Town of Pahrump in January 2001. Twenty-seven exceedances of the national 24-hour ambient air quality standard (NAAQS) were recorded during 2001, 2002 and 2003. Under the federal Clean Air Act, this meant that Pahrump was not attaining the federal PM10 24-hour health-based standard of 150 µg/m3.

Common sources of PM10 are: burning fuels, such as wood in woodstoves and fireplaces or diesel combustion from motor vehicles; crushing or grinding; dust from unpaved roads, construction sites and other disturbed land surfaces; and industrial processes. Breathing high levels of PM10 is harmful to lung tissue and aggravates asthma symptoms. Additional information is available regarding Air Quality and Particulate Matter

After exceedances of a NAAQS are monitored and an area is deemed to be in nonattainment by the state, the Governor typically submits a letter to the US Environmental Protection Agency (US EPA) recommending that the area be designated nonattainment. US EPA then evaluates the state’s recommendation and promulgates its decision in the Federal Register. Once an area is designated nonattainment, the state has a specified period of time to prepare and submit a state implementation plan (SIP) to US EPA. The SIP will contain a strategy with control measures to bring the area back into attainment of the standard, typically within five years of designation. Once the standard is achieved, control measures must remain in place for two 10-year periods to ensure the area does not fall back into nonattainment.

The US EPA, the Nevada Division of Environmental Protection (NDEP), the Pahrump Town Board and Nye County agreed to use the MOU approach instead of the formal SIP submittal. The MOU was signed by all four parties in September 2003; it was extended in 2014 through 2015. For the purpose of the MOU, the Pahrump Regional Planning District boundaries were used to generate the emission inventories. More information on the MOU can be found in the briefing document, and in the list of definitions. The MOU established a deadline of December 31, 2009 to bring the area back into attainment. Control strategies were required to be in place by 2006 and remain in place to ensure that the Pahrump Valley continues to attain the standards in the future. The MOU was the first step in accelerating the development and implementation of a locally-initiated PM10 control plan, the Clean Air Action Plan (Action Plan).

The Action Plan was developed by the NDEP, Nye County and the Town of Pahrump as the strategy for achieving compliance with the 24-hour PM10 NAAQS. The Action Plan first identified the primary sources of anthropogenic PM10 emissions in Pahrump. Disturbed vacant lands and unpaved roads were determined to be the main contributors, accounting for 92% of PM10 emissions in the Valley. The emission reduction strategies and control measures selected in the Action Plan explicitly targeted these types of sources and focused on areas within the Pahrump Regional Planning District where the majority of land development was occurring and was expected to occur in the future. Nye County began formal implementation of its dust control program in December 2004. The NDEP-BAQP expanded continuous monitoring of PM10 concentrations in the aforementioned areas.

By 2006, monitoring data demonstrated that Pahrump was attaining the PM10 standards. The NDEP conducted a second emission inventory after the December 31, 2009 attainment deadline to verify the efficacy of the control measures implemented in Pahrump and to quantify the improvement in air quality. The NDEP’s assessment of the impact of the control measures adopted in the MOU and Action Plan is presented in a 2015 report, Pahrump Valley, Nevada. PM10 – Ten Years of Success. The data and the analyses presented in this report unequivocally demonstrate that air quality in the Pahrump Regional Planning District has substantially improved to a level below the national standards. The mitigation efforts to reduce dust from disturbed vacant land and unpaved roads resulted in major dust emission reductions of approximately 50 percent. Pahrump achieved attainment before the December 31, 2009 deadline and continues to attain the PM10 standards, with the exception of uncontrollable high-wind dust events, which can be excluded from the compliance evaluation with US EPA concurrence.

The first monitor was installed in January 2001 near the municipal pool in the downtown area of Pahrump. Two sites were added in 2003, and by 2006 the BAQP had expanded the monitoring network in the Pahrump Valley to four sites. As of spring 2015, monitors are located and operating at Manse Elementary School, Glenoaks Street, the church on Gamebird Road and a background site on Linda Street.

All of the monitors in Pahrump collect data on a continuous basis and are located in conjunction with a weather station capable of measuring maximum wind speed, wind direction and temperature. Each monitor is a Beta Attenuation Monitor and is the equivalent of a federal reference method monitor. The BAQP downloads data hourly to the office in Carson City via wireless telemetry from each of the monitors. The map of the NDEP monitoring sites shows the locations of the monitoring sites in relation to each other and also shows the location of the meteorological tower. The NDEP’s current and historic air quality monitoring data for Pahrump can be accessed on our near real-time monitoring page.